Your gateway to expertise and knowledge

Odense is a modern industrial city. The new industrial revolution is not all that new to Odense. In fact, Odense has been working with robotics since 1986.

In 2016, the Danish business journalist Carsten Steno wrote the book “A Cluster of Success” about the robotics environment in Odense and the rise of Universal Robots.
The story of the cluster goes back 30 years. 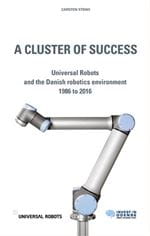 What makes the city of Odense special is its strong robotic ecosystem of companies, education/research and public players. In this Triple Helix ecosystem you will find three great clusters representing the strengths of Odense.

In Odense we aim to be the World's leading Robotic City – and not without a reason. The area around Odense is a global stronghold for innovation and development within collaborative mobile robots, and more than 40% of companies work with collaborative robots related products.

In 2015 Odense Robotics StartUp Hub was established in order to continuously bring new companies with growth potential to the ecosystem. The test centre for drones is located at the Hans Christian Andersen Airport, and in the health sector there is a willingness to test new products.

• +4600 employees in the Robotics & Drone Industry on Funen

Back in 2016, Odense hosted the international event RoboBusiness Europe and the event is hosted in the city in 2023 as well. Furthermore, Odense has been hosting Nordic UAS Event and WHINN – Week of Health and INNovation.

So there are plenty of business opportunities and reasons to invest in Odense. And in Odense we actively try to match companies and investors.
The primary interest of Invest in Odense's investor network is to invest in companies within the fields of robotics, drones, medical cannabis and life science. In addition to funding, the investors contribute with expertise, networks and knowledge of the clusters – key success factors of a start-up, which can be brought into the partnership.

Invest in Odense identify investors that match the individual capital-seeking company. So when your business needs to grow, Odense is the place to be.